​Anger is a result of thinking that we have been unfairly treated or disrespected, or that others have broken or fallen short of our rules, standards  or expectations, and we won't stand for it.
​
Thinking this way leads us to feel angry, which stimulates the body's adrenaline response which is our body's way of helping us to cope with either fighting, or running away ('fight or flight' response).    We respond to those thoughts and feelings, by acting, or feeling an urge to act, in threatening or aggressive ways.

When there is real, or we believe there is a real, threat or danger, our bodies' automatic survival mechanism kicks in very quickly.  This helps energise us to fight or run away ('fight or flight response').  The action urge associated with anger is the urge to attack.  We will notice lots of physical sensations, which might include:

We all feel angry some times.  Some people tend to become angry easily (a "short fuse"), and some have problems controlling their anger.  Anger has consequences, and they often involve hurting other people - more usually their feelings, but sometimes physically.  Anger can cause problems in our personal lives, and affect work and study.  After an angry outburst, we can think very critically of ourselves and our actions, leading us to feel guilty, ashamed and lower our mood, which might result in our withdrawing from others, not wanting to do anything. 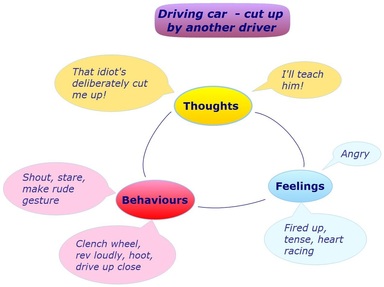